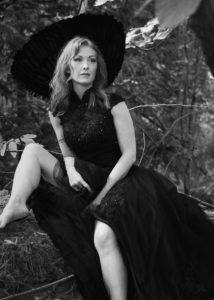 Syleena was born in the multicultural city of Seattle. She feels have very lucky to to have grown up in a place where she always felt free to practice her path, no matter what the path may have been at that time. Her hereditary background is very mixed, but mostly of Norse and American Indian (Chippewa Turtle Mountain Band) heritage. Both sides of her genealogy share familial and ancestral magic and clairvoyance. Though her mother is a Roman Catholic and father a Lutheran to Catholic convert – there was no denying the strong pull of clairvoyance that seeped through the gene line. She spent many years of her youth trying to make sense of things that she could see and feel that no one else could.

From then she walked many religious paths and ended up settling in Wicca by the age of twenty-five. British Traditional Wicca felt the most comfortable to her. She started to dabble in Tarot at the age of twenty and began giving tarot readings professionally soon after.

From there her path fell before her and she landed under the wing of some of the best Witches of our time. In 2017 Syleena started Triple Goddess Coven with a few Witchlings and received the church’s federal 501c3 non-profit church status the same year. Syleena has always wanted to be a spiritual mother to many and opted out of having children. She is completely fulfilled with her church, her amazing brother and sister, and two beautiful nieces. Her life’s mission is to create the first brick and mortar Wiccan Church in her community.

When Syleena is not being magical, she is the Lead Laboratory Assistant of the very hospital in which she was born. She processes specimens and draws blood from people on a very mundane non-sacrificial level. She also loves animals and hopes to pet a tiger someday…without getting eaten.