Lammas ritual was conducted by our High Priestess, Syleena.

I have chosen to invoke am Egyptian deity for this Lammas ritual as our tradition pulls from all the Gods and sees the same and different in all of the Mighty Ones. Many people it seems, since Litha, have been experiencing death, negativity, and miscommunications. Mercury is in retrograde until August 15th. It will seem like the world is ending for a lot of you. This Lammas is particularly important and that is why I am focusing on Khepri. Remember Lammas is the first sacrifice. We take from the God here, but he gives it freely. He gives us his bounty, but in this gift there is coming death. The Wheel of the year is ALL about the death and rebirth cycle. We must change the way we think about death. Our mortal minds think of death as bad and as punishment, but really is it not just dharma? The God gives so then he must die. The universe requires balance. Death is balance. Magic is neither white nor black, it is intention. How and for what do use such magic? A price paid for magical requests is not the Goddess taking from you because you asked for to much. It is balance. If you see death as evil, you are not evolving. Next Sabbat, at Mabon Persephone will descend to the Underworld to appease Hades. Her mother Demeter will  lay to rest the earth with winter because this is balance. Khepri was one of the forms of Ra, the sun god. Khepri was the dawn, Ra was midday and Atum was the evening sun. He was often shown as a beetle-headed man, a beetle-headed hawk or just simply the scarab beetle. The name Khepri comes from the ancient Egyptian word Kheper meaning “to become” or “to be transformed”. He is the creative power linked with the miracle of the first sunrise every morning. The Egyptians would refer to him as “The Shining One”. In Egyptian mythology there is a story how the corpse of Khepri is divided and buried every night. Every morning his body is resurrected and he rises in triumph. This I tell you because tonight we revel in greed in the bounty of the Sun God. But do not forget balance must be kept, for the Sun God will die soon. Back and forth, around and down, circling the sacred Wheel we see how nature gives and takes. GIVE and TAKE. Yes you may be taken from, but you are also given many things. So tonight with a renewed sense of giving and taking I hand you the wheat of the Sun God.

Khepri is the most revered sun God of resurrection, tonight he gives you wheat as a reminder of the things you have been given. As I cut the wheat foresee the balance that is soon to come and take heart that as Pagan you understand better than anyone that life is a cycle. You too will soon end only to be reborn. Think of one thing now that has blessed you and take comfort in this the part of the Wheel that gives. 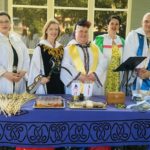 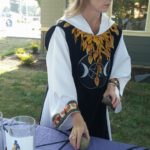 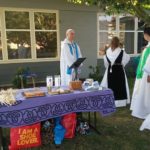 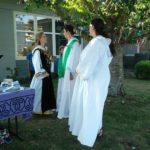 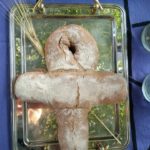 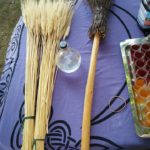 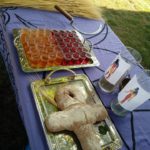 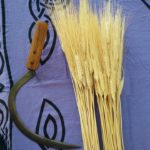 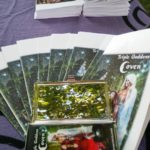