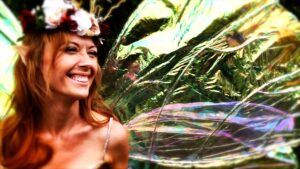 “I believe in fairies, sure as death. Brownies! Pixies! Sprites!  and Nymphs! Come to me fairly. Each lad and lass!Come out of your Fairy Bower. Come upon us this golden hour. Come to us, I beg you please. Fairies dancing upon the breeze. Queen of the Fae Titania bring your people here this day!”

Mid-Summer/Litha, the Summer Solstice, is one of the three annual Feasts of Faeries, the Fae. The other Faerie Festivals are on Samhain and Beltane. The day of the Summer Solstice is when access to their realm is the easiest and the Faes’ powers, strongest. They frolic about bonfires, joyously singing and dancing. The Fae are creatures who will work in gardens to ensure abundant harvests. They, most often, look like humans and usually have wings. People with the gift of clairvoyance, psychic seeing, can see them in gardens, forests and water. They will help people if they are treated kindly and shown gratitude. Midsummer is one of the most powerful nights for magick, especially healing, love magick, energy, protection and purification. It’s a time of gratitude for kin and friends. Reflect on the progress of seeds that you planted in the earth. Get rid of patterns, and objects that no longer serve your Higher Self. Strengthen your connection with Otherworld beings, especially the Fae. Summer Solstice occurs sometime between June 20th – 21st in the northern hemisphere. Solstice means sun stands still and this is because as the sun reaches its highest point in the sky for the few days on and around Solstice the sun appears to stand still in the heavens. It is the longest day of the year, where the night is short and the light reigns. Just imagine how magical this must have been to ancient peoples who worshiped the sun as their God. The Sun represents the divine masculine and is the giver of life. Ancient peoples depended on the sun for sustenance and food for the coming winter months ahead. Cultures all around the world for eons have held celebrations, festivals, gatherings and rituals to mark this special time of year. Fire ceremonies are traditional for Solstice to pay homage and honor to the sun.